This week I said (a hopefully temporary) goodbye to London and moved back to my hometown of Bryn Mawr. Like Jack Worthing in The Importance of Being Earnest, I have come to regard London as a place where I can be someone else – someone more adventurous, more active, more exotic, even. (Suddenly having an American accent makes me of much more interest!) However, as this summer recipe proves by crossing the boundaries of hamburgers and fish cakes, it is indeed possible to incorporate two seemingly different ideas into something uniquely beautiful. I will keep this in mind as I try to retain aspects of my London life (with hopefully less farcical results than Oscar Wilde’s characters). 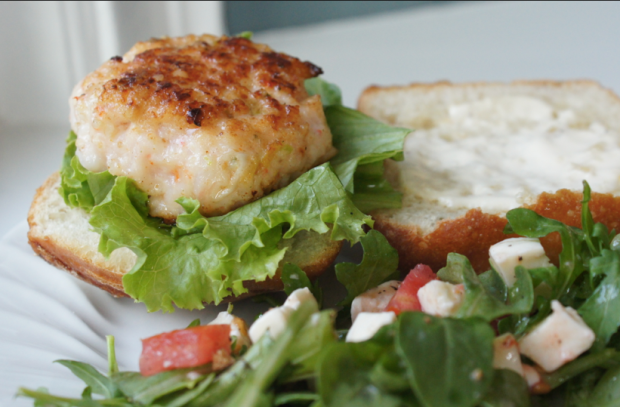 1 lemon (both zest and juice)

1 lime (both zest and juice)

1. In food processor, pulse shrimp about 10 times (until a chunky paste consistency).

3. Form four patties and refrigerate for at least twenty minutes.

4. While patties are chilling, slice ciabatta rolls in half using serrated knife. Drizzle with olive oil, then toast at 350 degrees for ten minutes.

5. Heat olive oil in sauté pan over medium-high heat. Brown patties for about two minutes on each side. Transfer to oven and cook for another ten minutes.

6. Combine mayonnaise, lemon juice, lime juice, and a dash of salt and pepper. Spread mayo mixture on both sides of ciabatta. Add a leaf of lettuce and shrimp burger. Serve with a fresh summer salad.

Enjoy shrimp burgers with Oscar Wilde’s The Importance of Being Earnest, and check in at http://warandpeach.com for future recipes and book reviews!

As many of you know, over a year and a half ago I moved to London to attend culinary school. Many people questioned my choice to study cuisine in Great Britain – a place not known for its national foods. However, like several characters in Aldous Huxley’s Brave New World, I have always regarded London as a sort of dream world – different and modern in many ways. Thankfully, my experience with the city has been much more pleasant than those of Huxley’s account. Every day I take delight in the people, history, and – the reason I originally moved here – food.

Though culinary school perfected my butchery, seasoning, and knife skills, there is still one aspect of my repertoire that feels very shaky: cooking meat to perfection. It terrifies me that the difference of two minutes over high heat could determine whether a pork loin is meltingly moist or tough as rope. However, there is one flawless method that – by leaving a substantial time and temperature margin – a chef can ensure a gorgeous outcome every time: braising. By cooking almost any meat cut low and slow, a chef can break down the fats, tenderize the meat, and serve a dish whose smoothness barely requires its beholder to chew.

And, with the barbecue flavorings melding for six hours in the oven, I can go about my London-y day and return home to some of my “old world” American flavors. 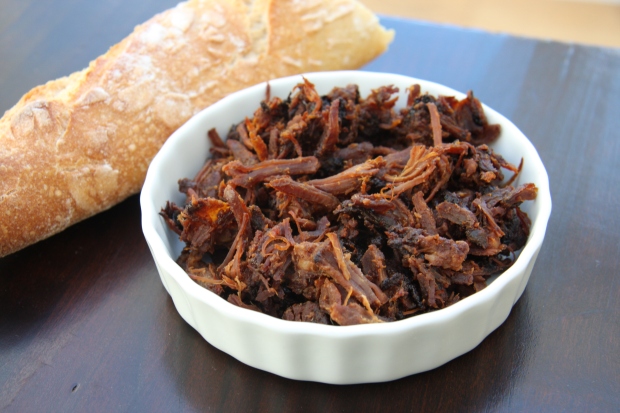 1. Season pork with salt and pepper. In a Dutch oven, over medium-high heat, brown pork on all sides in olive oil.

2. Remove pork and reduce heat to medium. Add sliced onions and sautee until translucent. Add cinnamon, paprika, brown sugar, and ketchup; whisking until smooth. Add pork back in, then add bouillon cube and water (enough to just cover pork). Bring to a boil, cover, and put in 300-degree oven.

3. The pork will cook for about 6 hours, but check every two hours to see if all of the liquid has evaporated. If so, add about 100 ml of water. The goal is to finish after six hours with a glazed consistency, so don’t add too much water at a time.

4. After six hours, remove from oven. Shred pork using two forks, and if needed, reduce the liquid over medium heat until it reaches glaze-like consistency. (I did not need to do this when I cooked it, because most of the liquid was gone after six hours!)

5. Serve with bread or Grammie’s coleslaw.

Tonight Edward and I are going to a live broadcast of La Bohéme in Trafalgar Square. For our opera picnic, he’s bringing the wine, and I’m in charge of food. It’s nights like these that make me so glad to live in London – there is the possibility of culture and romance on any given night.

However, it’s also nice to get away sometimes. We spent last weekend in Wivenhoe, a small river town near the eastern coast. We ate dinner at a cozy tapas place and both agreed that it was the best meal we’d eaten in a long time. Our favorite dish was a California-inspired flatbread, light enough to save room for other dishes, but substantial enough to make a lasting impression.

For tonight’s menu, I’ve decided to bring a bit of our quiet, relaxed weekend back to the buzzing city – keeping the same flavors but melting them into travel-friendly quesadillas. Like the New York upper class society in Edith Wharton’s The Age of Innocence, a simple shell masks the complex flavors hidden inside. I’m confident that the opera singers won’t be the only stars of the show tonight! 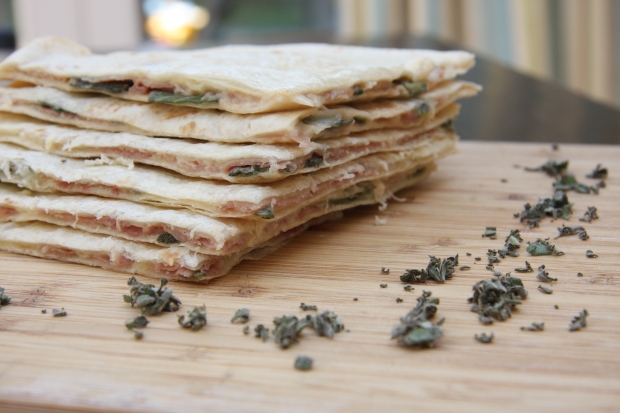 1. In small saucepan, bring water, balsamic vinegar, and brown sugar to a simmer. Allow to reduce down for about ten minutes, until the mixture reaches glaze-like consistency. (You can test this by seeing if the glaze coats the back of a spoon.) Allow to cool.

3. Working with two tortillas at a time, spread the mozzarella mixture on both. (Leave a half-inch border, as mozzarella will spread when it melts.) Lay prosciutto slices and sage leaves, and drizzle balsamic glaze on one side, and fold the second over so that both spread sides are facing inwards (as a sandwich). Repeat for as many quesadillas as you require.

4. Bake on one side for 5 minutes in a 180-degree oven. Carefully flip the quesadillas, and bake for 3-5 more minutes. Allow to cool slightly, then cut into quarters.

*Note: sage has a very strong flavor, so use sparingly!

Enjoy mozzarella quesadillas with Edith Wharton’s The Age of Innocence, and check in at http://warandpeach.com for future recipes and book reviews!