My actual boyfriend was the one who broke the news to me about my make-believe boyfriend’s engagement. When Benedict Cumberbatch made his grand announcement in the Times last week, Sherlock devotees all over the world took the news quite hard. But he’s not the only Benedict causing trouble. In William Shakespeare’s Much Ado About Nothing, Benedick toys with Beatrice in a variety of ways and surprises everyone (players and audience alike) with a sudden shift of his views on marriage.

All of Shakespeare’s comedies make for very pleasant reading (or viewing) material. Like a proper Thanksgiving stuffing, something that has gone stale (seemingly past the point of being salvaged) can indeed be the foundation for all of the other components. In this dish, different textures keep each bite interesting, and the playful combination of smooth honey and punchy ginger teases the consumer’s palate. 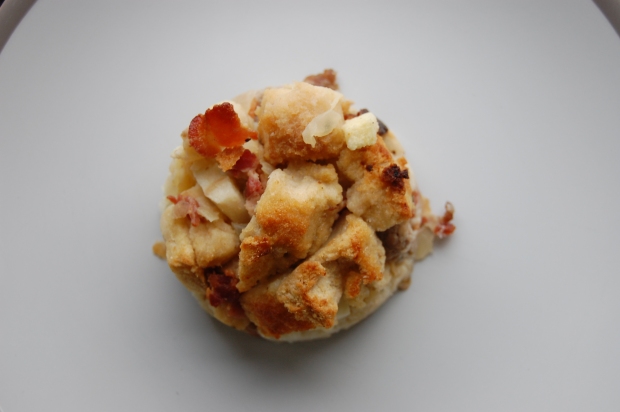 1 small egg (or half of a larger egg), beaten

1. Cube bread and lay out in baking dish. Drizzle with olive oil and sprinkle with half of the ground ginger. Bake in 350-degree oven for about 10 minutes, then remove and let cool.

4. Beat egg with warm (but not hot) chicken stock. Toss dry ingredients in the liquid, then spread entire mixture evenly in baking dish. Drizzle with honey and sprinkle the rest of the ginger. Dot the stuffing all over with bits of cold, cubed butter.

5. Bake stuffing in a 350-degree oven until liquid is absorbed and top is golden brown.

Enjoy ginger honey stuffing with William Shakespeare’s Much Ado About Nothing, and check in at http://warandpeach.com for future recipes and book reviews!

One thought on “Much Ado About Stuffing”